I've been following the developments at Development Seed regarding their work in Open Atrium. Development Seed has also been working on another project entitled Aegir. From the project page: "Aegir is a set of Drupal modules that help you maintain your Drupal sites."

As my multi-site environment continues to grow with various projects running the gamut from basic content management through application development, I'd come to find that managing the code base was easy enough, but if there was a tool that could help organize and provide a dashboard view, now that would really be cool. If I could get out of "one off-ing" each newly provisioned site, that would be a labor savings.

I heard about Aegir and Open Atrium at a Silicon Valley Drupal meeting and began looking into them trying to figure out where they might fit in my portfolio of projects. We'll deal with Open Atrium in a different post.

Aegir installs itself as profile. I think of this as an umbrella or "parent" Drupal install that allows for the creation and management of "child" sites. Aegir has other basic features that include Platforms, Database and Web servers. A platform can be thought of a baseline installation. That is to say that if I have a platform for current version of Drupal, new sites will use that version. If I have created a platform for Open Atrium beta 3, I will be able to create a new site that uses Open Atrium beta 3 as its baseline set of core, database tables and modules. In a sense, it's similar to creating different Virtual Machines (VM's). Being able to deploy and test in different versions as well as migrate sites to different platforms offers some advantages in how we can stage and manage environments while testing. Upon successful testing, we should be able to migrate from the old to the new version (although I'm not far enough along to have tested this yet). For an example, see the Development Seed video on this subject.

Here's a screen shot that shows my dev box and a list of dev and production sites under Aegir management. 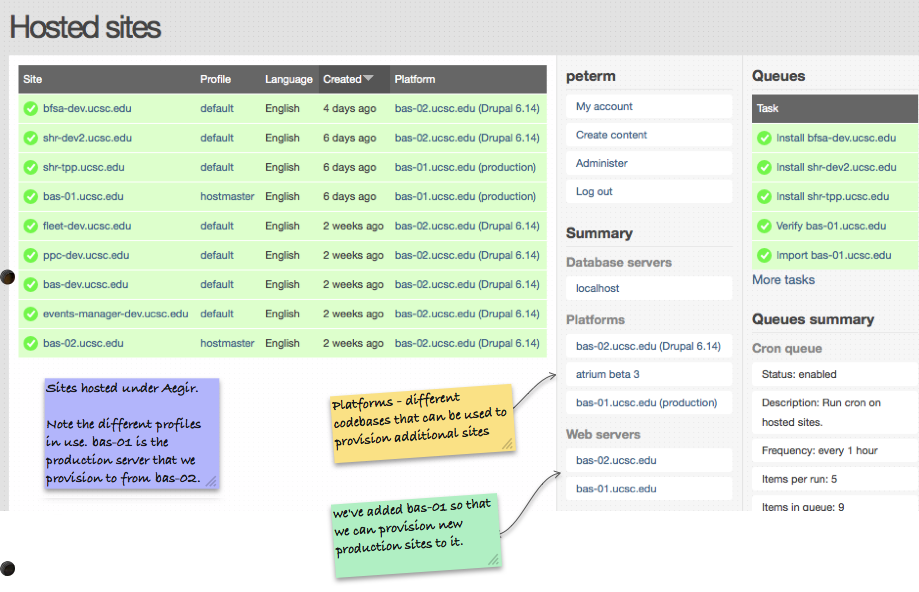 My next steps are to continue digging into the migration features of Aegir. I've also observed some odd behavior when provisioning sites that I need to run down; empty emails are being sent during the provisioning process without the admin account information. This could be due to something I've messed up in the configuration. Beyond that, I'm keeping an eye on developments in the next revision via twitter. What I'm really interested in pursuing is looking at how to maximize the "enterprise-ness" of Drupal in my higher ed context. More to follow.